When I go on vacation, I take a stack of books with me. My wife rolls her eyes and shakes her head before pointing out the obvious: I’ve brought a semester’s worth of reading for a week’s worth of vacation. I sheepishly agree—but I bring them anyway. She brings one of those summer paperback beach-reads and goes through it cover-to-cover. I start several of my hardcover tomes and maybe finish one. Maybe.

This year the reading list for discerning municipal bond investors is a bit more focused than usual since I am using some of the books in my Boston University public finance class this fall. I’ve read a couple of these before, so those will just be a refresher. Others I’ve always wanted to get to and sitting on the beach is as good a time as any. 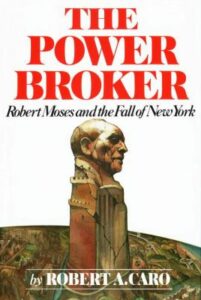 Book 1. It always surprises me that more municipal bond investors haven’t read Robert Caro’s The Power Broker: Robert Moses and the Fall of New York. On the surface, it seemingly has little to do with investing. No formulas, no ratios. It has everything to do with public policy and public works—which are the ultimate drivers behind every municipal bond financing. In that regard, this book stands as a seminal work in the field. Yes, the book weighs in at 1,162 pages, which I appreciate can be intimidating. (To make that feel lighter, the original was close to 2,000 pages before editing.) If you’ve ever driven over nearly any bridge or on any highway into, around, or out of New York City—you were driving on the work of Robert Moses.

The book details a man who single-mindedly shaped New York City and Long Island according to his vision. Parks, highways, bridges: no public works project was too big. His plans in building the Verrazano-Narrows Bridge had to take into account the curvature of the earth to link Brooklyn to northern New Jersey. How did he manage to find the billions of dollars to fund his nearly unceasing ambitions? Through tolls and municipal bonds. He shrewdly saw bonds were a contract between bondholders and bond issuer, a contract that could not be violated or broken, protected by Article 1, Section 10, Clause 1 of the U.S. Constitution.

Correspondingly, any funds dedicated to bondholders could not be appropriated by any other agency or government entity. Every dollar of tolls collected by the bridges he built went to the Triborough Bridge and Tunnel Authority which he headed (among others). After paying bondholders, the balance went to the Authority to do with what it pleased. In effect, he used municipal bonds to not only build bridges, tunnels, roads, and parks, but also to create an independent and self-funding government of which he completely controlled. The book is long, but it is a page-turner. 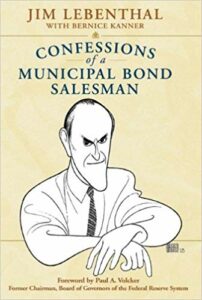 Book 2. The second book is a lot lighter in numerous ways, not just the page count. Jim Lebenthal’s Confessions of a Municipal Bond Salesman is a wildly entertaining romp through the world of municipal bonds written by one of its most ardent supporters. Working in the business started by his parents in 1925, he grew the muni-focused firm bearing his family name to be one of the most respected on Wall Street. Labeling municipal bonds “the workhorses” of investments, Jim proudly proclaimed “bonds are my babies” to anyone who would listen.

Jim passed a few years back and the firm closed in 2017, ending a chapter in municipal bond market history. His book stands as a testament to what focus, hard work, and a good sense of humor can do to drive success. Plus, it still offers a wealth of information about the municipal bond market and municipal bonds, much of which remains applicable today. 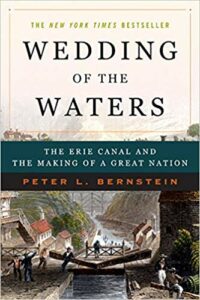 Book 3. In Wedding of the Waters: The Erie Canal and the Making of a Great Nation, Peter L. Bernstein tells the story of one the earliest and most ambitious public works projects undertaken in the new nation. It is so engrossing you lose yourself in the passions of the early 1800s. More than documenting the engineering marvels necessary to link the 363 miles between Lake Erie and the Hudson River, Bernstein weaves together the economic, social and political impact this infrastructure had in shaping America into the nation it was becoming. The canal was completed in 1825.

Some may shrug, seeing this book as just being about early American history. But the astute reader will immediate recognize the parallels between that project and the public works infrastructure projects of today. The arguments and means used by then Governor of New York DeWitt Clinton to get the canal funded and build are directly relevant today in resolving the far-too-long delayed infrastructure projects so critically needed today. 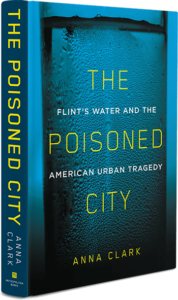 Book 4. As fascinating as the history of public works projects may be, particularly as a perspective on the present day, I offer a book that covers the all-too current. Anna Clark’s The Poisoned City: Flint’s Water and the American Urban Tragedy documents in painful detail the blatant abrogation of public responsibility of those officials whose decisions literally flooded Flint, Michigan’s water supply with lead and other toxins. Municipal bonds played a crucial role here.

Through the recently created Karegnondi Water Authority (Moody’s: NR; Standard & Poor’s: A), the bond issues financed new water pipelines for the city. Payment is backed by both the city of Flint and the county of Genesee; the debt is further secured with a “backstop” provision of the county to make up any shortfalls by the city. That’s unusual, until you learn that the city of Flint, whose last rating by Moody’s Investor Service was at a below-investment-grade Ba1 in 2006, now holds no ratings from either rating agency—effectively precluding the City access to borrow in the capital markets. But money doesn’t necessarily solve everything.  Flint’s water issues and the deep social and health repercussions remain unresolved. It is still a hot topic, as the mentions in the 2020 Democrat presidential nomination debates testify to.

Municipal Bonds: A Holistic View Of A Community’s Environment And Sustainability